Manage your Mind with the Inner Witness

In this video, I share a technique for managing the mind using the Inner Witness. The Inner Witness is a technique that allows you to take an objective look at your thoughts and how it can help you better understand what’s going on in your head.

Hello friends, Sadashiva Stef here. I'm currently in the beautiful regions in the Western part of Canada where I spent the weekend with my family, and I wanted to shoot a quick video because something happened the other day during a hike that we did, my wife and my 11 year old. Because I think is something for everybody to apply if you're interested in understanding how the mind works and how to deal with the mind.

So it may be of interest to those of you which are interested in the law of attraction, and those who have read the chimp paradox as well, because that's all about mind work and how it works and how to work with the mind. The mind chatter more specifically. And when it comes to the chimp paradox, you remember from the book that we have the logical mind, and we have the emotional mind coming out of the limbic system of our brain. So the primate version, or let's say, portion of our brain linked to the emotions, which are a little bit more difficult to control.

And for those of you who are interested, the Law of attraction, obviously, you understand that you cannot attract something into your life if you're unable to visualize it.

Hiking with my son

Long story short, we were actually like just 15, 20 minutes into a hike and my little one started to complain.

"I don't want to go here. I didn't sign up for this. This is a leisure weekend. I want to play on my Nintendo switch."

You know, the stories, how it goes with kids. And I asked myself, how can I help him understand an easy technique where you get rather fast the grip on your monkey mind like this mind chatter going on because everything he was telling himself, the story he was telling himself was the story of I'm not supposed to be here. I'm supposed to play on my Nintendo Switch, to stay in the chalet and not going on this stupid hike with you guys.

So anyway, and it appeared to me that I would like to explain to him a technique that I use now during meditative practice quite often, which is the practice of the witness.

Explaining to my son how the mind works

And basically what I told him is that hey Alex, imagine what's going on in your mind right now is mind chatter. That's the monkey mind telling you stories that you don't like to do, what you're doing right now. And we all have that. I told him its not specific to you.

There's nothing wrong with what's going on in your head, but just realize that there is this monkey mind which you don't have an easy control over. And the mind chatter is going on one thought after the other and you're angry with us, etc. Now imagine that your mind and is not just one monolithic thing, but there are different layers.

And one layer is this emotional limbic system mind that is chattering its way through and you're just bleeding out what you listen, what you hear from that mind. But what about superimposing a calm portion of that mind on top? Let's call it the witness or the observer. And let this observer look at this monkey mind and just observe it and realize actually that you are not that chattering mind, because if you have the possibility to put yourself on top of it or some portion of your mind, let's call it the higher mind versus the lower mind.

I like it here. We're out in the nature with your mom and dad, and you know, one step after the other, you may enjoy the practice of walking. And I also explained to him that's now Hindu philosophy. You don't need to believe into that. That's my thing.

But I explained to him, if you are living what you're living right now, then there is a reason for you to live this right now. It's not happening by happen-chance. There is a reason for everything that happens in our lives. And I told maybe what I'm telling you right now in terms of the chattering mind and this witness mind, this observer mind is something you're supposed to learn, because otherwise I wouldn't talk about it, right? And maybe somehow in a former life or before coming back to this life, reincarnating, he's very familiar with the reincarnation theory.

Maybe you told yourself that you wanted to learn this and you are choosing a family with a dad that was able to explain it to you so that you can actually learn from this. And if that's the case, Alex, I told him then somehow you have the responsibility to learn that and to apply it in your life. And guess what. Once you learn this, I think very strongly that you can apply this throughout your life at various situations. Whenever this chatter mind is coming on and you don't really come along with it or you don't really know how to manage it.

This is the way to do it, have the observer, look at it with a smile and then talk to him.

How my son processed the information

And suddenly Alex went completely quiet for a few minutes, just walking. Nothing. No word, nothing. And I really, truly felt how this thought was entering his mind, his thought process.

And he was processing that information. And I kid you not the rest of the hike. He changed like this. He was calm, he was smiling. He was funny. He was positive. And he did his hike up to the end and he was happy afterwards and told me about it. That something made him change the way he was looking at all this. So I was flabbergasted how quickly he absorbed it. He's an 11 year old kid very often do things quickly once they understand it, and really accepted. They are faster than the others are.

But still I was quite amazed by how he applied that. So I wanted to share that story because it was such an impact it made on him. And I saw to myself afterwards. Wait a minute, my students, because I'm teaching, as you may know, in my website mylifestyle.business, I teach people how to build an online business and on another website, I train people on how to become a digital marketer. You need for achieving these types of life objectives or in this case, business objective.

You need to be in control of your mind because building an online business is building habits that are positive in the sense of creating what you want to create, building the future that you'd like to have for yourself, becoming that different person and grow. And without controlling your mind, that's pretty difficult or quite impossible.

I would say so.

I wanted to give that to you that example of an eleven year old of how to be able to work with your mind, which is very important.

So again, the practice is very simple. The witness or the observer, the way you can visualize that really it's like imagine yourself talking to somebody or being faced with a situation, but not being in your body, physically looking through your eyes. But somebody from behind your eyes, somebody being in the background and observing the situation, observing what's going on, observing the mind chatter going on in your head.

If they are negative mind patterns, thought patterns, observe them first. That's the first step is to understand, actually, that you can have several layers of looking at things. One layer, which is very difficult to control is this mind chatter, the monkey mind, as it is explained in the Chimp Paradox. And then this other level, a much higher evolutionary speaking mind. We can also call it intelligence, and it's a more evolved portion of us, and they're much more layers.

But I don't want to go into those details today, just when you realize that your mind is telling you a story, remember that story of Alex, just like, get out of it, out of your own mind. Adopt this higher mind and observe it just behind and look at it from the outside.

And suddenly you realize that you actually have a control over this mind chatter. And that's the first step. And then there are practices obviously, techniques that I can explain teach later on what to do with this, because there's much, much more that can be done once you understand how your mind works. But the first step is we need to understand that actually, you have this mind chatter going on and that it's not necessarily the story that you like to hear for yourself, because stories tend to materialize themselves in your life.

So if you want to be in control of those stories and that's one way of doing it, so I wish you a nice day. 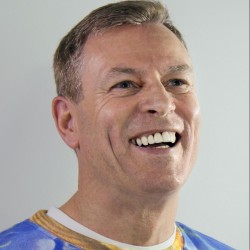 Ancient Mysteries About Who You Really Are

A Day in the Life of a Yogi CEO

Your mind: strongest ally, or worst enemy? Let's find out.